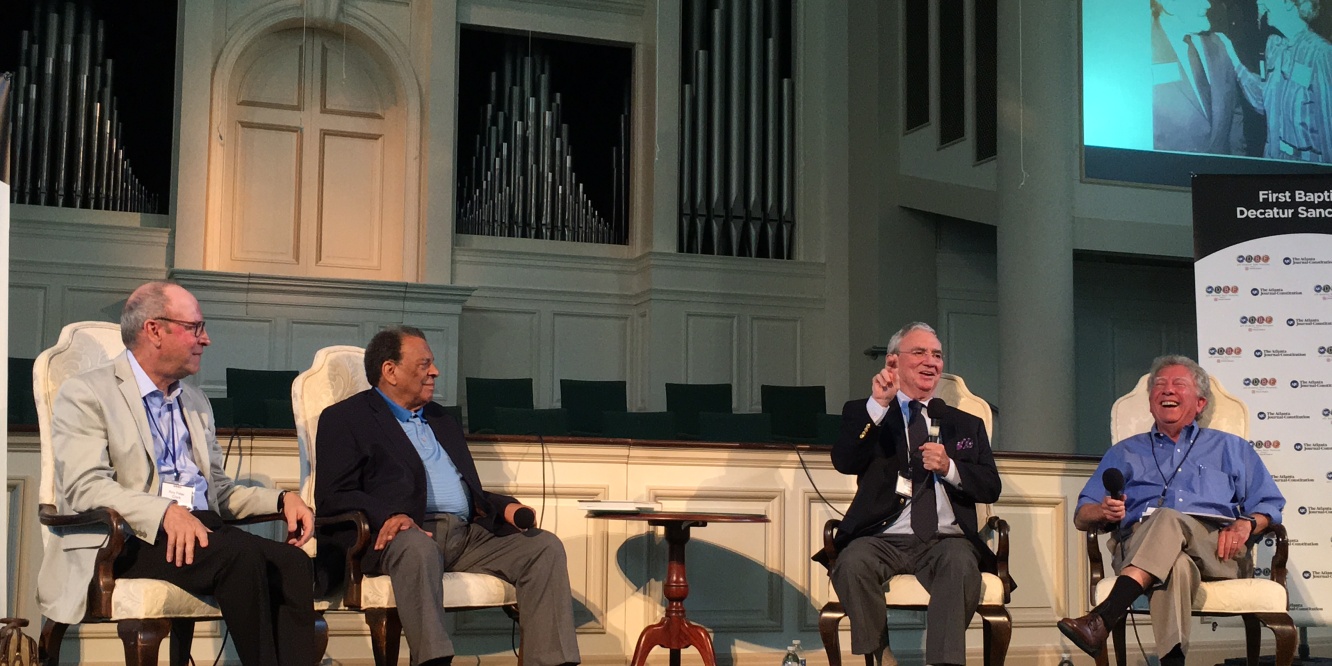 Hank Klibanoff kicked off the discussion with a lively discussion of Gene Patterson’s life with highlights of his coverage of the Civil Rights Movement accompanied by photographs.  Young explained how television helped the nation to understand the moral imperatives of the Civil Rights Movement–along with Dr. King’s understanding of the power of the media.  Young said that poverty is an issue that deserves more coverage and affects people of every color.  Young emphasized how important it is for journalists to have a global perspective, noting that we are now a global community but we are still thinking nationally.  He added that most of Trump’s politics are national but his business dealings are global.

Young also said that Trump may never admit that the unprecedented flooding of Hurricane Harvey was so devastating because of global warming–but nature speaks for itself.  Young said that if he was writing about it in a newspaper today he would call it “The Revenge of Reality.”  Young has written eight books according to Wikipedia, including An Easy Burden:  The Civil Rights Movement and the Transformation of America, A Way Out of No Way, and in nine volumes, The History of the Civil Rights Movement.

Gene Patterson became famous for his editorial “Flower for the Graves” about the Birmingham church bombing that killed four little girls in Alabama, noted Peter Roy Clark, who read passages from Patterson’s editorial.  Clark described strategies that Patterson used to reach white readers about the Civil Rights Movement–strategies that he said are relevant to our country today.

I studied with Roy Peter Clark as a journalism intern with the St. Petersburg Times/Evening Independent during the summer of 1979 (if memory serves,) at its budding journalism school, the Poynter Institute for Media Studies, (at that time it was called the Modern Media Institute).  Today the Poynter Institute is a nonprofit journalism school that owns the The Tampa Bay Times (formerly the St. Petersburg Times.)  Eugene Patterson was editor of the St. Petersburg Times during the 1970s and hired Clark in 1977, according to Wikipedia, which notes that by the 1970s Patterson had already previously served as editor of the Atlanta Journal and the Constitution (now the Atlanta Journal-Constitution) as well as the Washington Post.  Clark has written a number of books about writing including The Glamour of Grammar, and The Art of X-Ray Reading:  How the Secrets of 25 Great Works of Literature Will Improve Your Writing.  Clark and Klibanoff signed their books which were available for purchase after the panel discussion ended.

Hank Klibanoff, currently the director of Emory University’s Journalism program, won a Pulitzer Prize for History in 2007 for his book written with Gene Roberts, The Race Beat:  The Press, The Civil Rights Struggle, and the Awakening of a Nation, notes Wikipedia.  He is a former deputy managing editor of The Philadelphia Inquirer and former editor of the Atlanta Journal Constitution until 2008, notes Wikipedia.

Howell Raines, former editor of the New York Times, discussed how the internet has changed journalism along with its challenges and promises.  He is also author of several books, including My Soul Is Rested:  Movement Days in the Deep South Remembered, which is an oral history of the Civil Rights Movement, notes Wikipedia.

One member of the audience asked the panel for ideas about how to increase the public’s appetite for quality journalism–the panelists gave many thoughtful and important responses shared in the video.  Here are my own thoughts about this question.  One of the things that I learned as an intern for the St. Petersburg Times/Evening Independent is that Nelson Poynter, who owned the St. Petersburg Times, endowed it with enough funding that it would forever be financially independent–which means that its editorials and decisions about what issues to cover and how it reports them will not be influenced by its paid advertisers.  This makes the now Tampa Bay Times unique among most–maybe even all major newspapers in the country and it is a major factor in the quality of its journalistic integrity.  Another factor affecting its journalistic integrity and its service to the community is the fact that Poynter  made the nonprofit Poynter Institute the owner of the Tampa Bay Times upon his death–which further protects journalistic integrity from profit motives–and its commitments to community service.  For example  the paper decided to serve small rural communities that many for-profit newspapers would have decided are not profitable enough to serve.  The Tampa Bay Times, governed by the journalistic integrity and community-minded values of the Poynter Institute, chose to serve them because they deserve a quality newspaper delivering quality news (according to a statement I read on its website years ago).  Key factors that affect journalistic integrity and accuracy in reporting are discussed further in my ebook Conceiving a Peaceful World, in Chapter 4:  “Moments of Truth:  Dealing With Conflict–Reaching Consensus” which is about media accuracy, community dialogue and decision-making, and policy.  Accuracy and journalistic integrity are central to the kind of reporting that makes effective public dialogue possible–whether it’s in a newspaper, on television, or on the internet.  Issues affecting public dialogue are discussed in this chapter of my ebook, including the Tampa Bay Times‘ website www.PolitiFact.com which Roy Peter Clark described in yesterday’s panel discussion as the very first fact checking website on the internet which spurred the develop of hundreds more fact-checking internet sites that are now trying to help readers discern which information is actually factual.

The fact that the Tampa Bay Times is now owned by a nonprofit organization–even though it operates as a for-profit business–is extremely significant because the owner of a business or organization has the final word and ultimate influence on the values that guide an organization.  Nonprofits in general tend to be more concerned about their communities and the people they serve than for-profit corporations.  A for-profit corporation owned by a nonprofit is most likely to be governed and guided by nonprofit goals and values–whereas a nonprofit owned by a for-profit organization is most likely to be governed or at least significantly influenced by a financial bottom line–especially if it’s a corporation operating nationally or internationally and not located in or governed by a board of directors located in the community or communities in which it operates.  These are patterns that have become clear in 20 years of research for my ebook.  Many other researchers have talked about the importance of local ownership and community investment and how that affects quality and corporate or organizational responsibility, (for example Native American environmental activist and former Green Party vice presidential candidate Wynona LaDuke and also Richard Wolff in his videos about cooperatives such as The Cure.)

There are now two entire nonprofit news networks carried on DISH TV.  One is Free Speech TV and the other is LINK TV.  Both carry Democracy Now with Amy Goodman as well as other news programming, nonprofit environmental news such as Bioneers, and many independent film documentaries, many of which are funded by nonprofits and/or foundations.  There are no for-profit ads on either of these networks.  Both networks have internet sites: LinkTV.org and FreeSpeech.org.  Amy Goodman of Democracy Now for instance was the first outside journalist to cover the Dakota Access Pipeline Standing Rock Water Protector camp.  Goodman described in an interview recently on The Thom Hartmann Program how the major news organizations began covering Standing Rock only after her coverage began.  This is significant because most major news networks are now owned by six major for-profit corporations.  Many of these mega-corporations also own or have financial interests in fossil fuels–which is one reason why many major news corporations have for decades not reported news that is detrimental to the fossil fuel industry–for example either inaccurate or inconclusive reporting about climate change–or lack of reporting on it entirely.  The decline in investigative journalism and the importance of accurate reporting about energy,  sustainability and policy are some of the main reasons that the nonprofit Checks and Balances Project was formed according to its website.  Here is a small section from my ebook Conceiving a Peaceful World.

———–C. Gibson of Greenpeace writes that according to the Checks & Balances Project report, top U.S. newspapers fail to mention these ties to fossil fuels when they quote these organizations or their representatives who are denying the science of global warming, promoting fossil fuels, or criticizing clean energy.

“Tracking ten of the top fossil fuel front groups in 58 leading U.S. newspapers, the new report finds over 1,000 instances where ties to or funding from coal, oil and gas interests was not disclosed when including a shill group or quoting one of its ‘experts,'” notes Gibson.

In Al Gore’s recent speech at Netroots Nation, he discussed how shocking it was that during the 2016 presidential election debates there was not one question about climate change.  The for-profit mega-corporate ownership of most of the major newspaper and traditional television networks is a serious problem for journalistic bias and censorship, affecting journalistic quality, integrity, accuracy, and what gets covered and what news gets left out and ignored.  This is not a new problem–but the consolidation of media ownership is the worst it has ever been.  It is also a problem that affects not only environmental news and climate change, but any news that could affect corporate profits or power–for example:  war and peace which affects the war industry (weapons, fossil fuels, banks, and military-related industries)–and human rights issues such as racism, sexism, and immigration which affect consolidations of corporate political power.  These are some of the major issues affecting quality and accuracy in journalism today.

(Gore’s speech is also available on the Netroots Nation Facebook page where there is less audio reverb.  I had to hand-hold my video camera in the very back of the ballroom near an electrical outlet because closer outlets were used by major network news agencies.  My next goal is to purchase a battery pack.)