At least three African American people have been senselessly killed recently–in three different states–the most recent was George Floyd.  Two were killed by police.  A fourth  African American man was threatened with false accusations by a white woman after he politely asked her to follow the law and leash her dog.   People are rightfully angry and enraged at the continuing racism, structural and outright violence, and many other forms of racism like environmental racism–higher levels of pollution from factories located in communities of color that make deaths from COVID higher for African Americans breathing polluted air–as well as lack of access to health care, nonliving wages, etc.

Understandably, many people are tired of talking.  But they are only tired of talking because people aren’t listening and more importantly–things are not changing.  Last night I re-read what I wrote when Michael Brown was shot–it was amazing how many similarities there were–and how little things have changed.  Many are pointing out that it’s a pattern–and it has not changed much in 30 years–and its roots go back to slavery and its legacy of dehumanization, exploitation, and violence that has not gone away, but has been hidden in different, more insidious forms.   Police departments and the justice system must be reformed.  Maybe police records and complaints need to be reviewed annually by independent psychologists who also do annual psych evaluations for every officer–these measures should be combined with paid/free support services for police PTSD and other job-related losses, injuries, and deaths.  Police with notable PTSD can be moved to duties that are safer and less volatile.  If an officer has significant complaints from the community, or complaints/concerns raised through anonymous peer reviews, or if an officer has exhibited behaviors that are racist or violent, that should be addressed, including terminating their employment.

It’s also crucial to give protestors a real voice.  The Newtown Florist Club is a 65-year-old nonprofit of mostly African American women that originally organized to bring flowers to people dying on their street located near 13 factories.  They realized eventually that the high death rate on their street was due to pollution and  environmental racism.  They advocated for their community during the Civil Rights Movement and PREVENTED RIOTS on numerous occasions by organizing community events that gave community members the opportunity to speak in open mics, often holding meetings in local churches.  They also hosted panel discussions and town hall meetings in local churches with city and county officials, on topics such as racial profiling, where community members could voice concerns and ask questions.  They attended city and county commission meetings and presented concerns and requests regularly and taught teenagers how to do this as well.  When the KKK planned a “march” on the Hall County Courthouse steps in the late 1990s, about 800 people protested.  Violence was prevented –first and foremost because the protestors were nonviolent and because the protest was led by seasoned nonprofit, church, SCLC, and other leaders–but the way the protest was structured by the city before the protest even happened also helped tremendously to protect everyone who attended and prevent violence.  The city erected a high chain-link fence overnight between the courthouse area and the protestors’ area.  There were at least 150 or more feet between where the two groups would be positioned.    There were very few police on the ground–which made police interaction with either of the two groups much less likely.  SWAT teams were positioned on rooftops surrounding the area–which was intimidating, but their presence also mitigated against violence.  There was NO VIOLENCE during this protest.  The KKK has not come back to Gainesville.

Just as importantly–RIGHT NOW–giving people who are protesting George Floyd’s death a voice–a REAL voice–and a safe place to protest–could make a difference and could help protect protestors from looters, criminals taking advantage of the situation, infiltrators, those inciting violence, and other groups from out-of-state (who do not actually care about the issue at hand because they have very different agendas which may involve white supremacy, inciting violence, and/or creating division–groups that have been infiltrating the protests of the last two days).  Each of these groups of people are often actually separate groups of people who get mixed together and confused during protests.  The groups can overlap–but often they become confused in the midst of the chaos that happens when governments don’t make room for peoples’ serious and righteous concerns–and governments don’t create safe spaces for people to voice those concerns.  For example, why has no governor taken action to open up a large convention center or stadium–away from businesses–and  IMMEDIATELY mobilize known community and nonprofit leaders in African American communities to organize panel discussions with government leaders and/or open mic sessions for community members that is LIVE-STREAMED on TELEVISION and the internet and later permanently posted on a government-owned social media site to give community members a voice BEFORE protests can even start–and at the very least–do this by the afternoon after the first night of protests.  This could shift the role of police–at least to some extent–to protecting the protestors.  If there are no businesses nearby to loot–it may be easier for law enforcement to identify who is actually looting if looting occurs elsewhere–away from the organized protests if the protests are NOT near local businesses but rather are in a convention center or stadium.  Community members and/or police can check IDs so that only people from the same state can enter the organized protest area.  This would eliminate infiltration from out-of-state agitators and inciters of violence.  If violence occurs outside or elsewhere, it would likely be easier for police to separate out legitimate protestors (who are inside) from those who mainly wish to incite violence.  IT IS NOT A PERFECT SOLUTION–BUT IT WOULD MAKE A DIFFERENCE!  THE NEWTOWN FLORIST CLUB PREVENTED RIOTS THIS WAY.  THERE IS NO REASON THIS CANNOT BE DONE–AND IT WOULD BE GOOD GOVERNMENT TO DO THIS–AND HAVE DAILY TOWN HALLS, PANELS, AND GOVERNMENT BRIEFINGS TO IDENTIFY LAWS, PROCEDURES, AND INSTITUTIONS THAT NEED TO CHANGE–AND IDENTIFY ACTIONS THAT CAN BE TAKEN THAT ARE PREVENTIVE TO IMPROVE THE LIVES AND SAFETY OF COMMUNITY MEMBERS AND POLICE–IN REAL TIME.  IF PEOPLE SEE THINGS CHANGING IN REAL TIME–VIOLENCE CAN BE PREVENTED.  Some of these initiatives would require better funding for state and local governments from the federal government, but some would not need to cost money and involve changing existing laws and procedures.  FOR EXAMPLE, ON MAY 30TH, DURING GOV. CUOMO’S DAILY COVID-19 BRIEFING, HE DISCUSSED THE INJUSTICE AND TRAGEDY OF THE KILLING OF GEORGE FLOYD–AND THE FACT THAT IS IS A PATTERN THAT KEEPS HAPPENING AND IT HAS TO BE STOPPED– AND A REPORTER ASKED IF NEW YORK LAW 50A PREVENTS  THE PUBLIC FROM BEING INFORMED WHEN POLICE HAVE COMPLAINTS AGAINST THEM IN THEIR PERSONNEL RECORDS.  GOV. CUOMO SAID HE DIDN’T THINK 50A WOULD PREVENT THE PUBLIC FROM BEING INFORMED ABOUT COMPLAINTS AGAINST AN OFFICER–BUT HE INVITED THE NEW YORK STATE LEGISLATURE TO IMMEDIATELY MEET ONLINE AND CREATE A NEW LAW THAT WOULD MAKE COMPLAINTS AGAINST AN OFFICER PUBLIC INFORMATION, AND HE SAID HE WOULD SIGN IT IMMEDIATELY.  THAT IS AN EXAMPLE OF GOVERNMENT ACTION AND INTENT COMMUNICATED IN REAL TIME TO THE PUBLIC.  THE OFFICER IN MINNEAPOLIS WHO KILLED GEORGE FLOYD HAD MULTIPLE COMPLAINTS FILED AGAINST HIM–SO IT IS RELEVANT FOR THE PUBLIC TO BE INFORMED WHEN THERE ARE MULTIPLE COMPLAINTS AGAINST A PARTICULAR OFFICER.  IT IS ALSO AN INDICATION THAT MORE ACTION AGAINST THIS OFFICER SHOULD HAVE BEEN TAKEN BY THE MINNEAPOLIS POLICE DEPARTMENT TO PROTECT THE PUBLIC–BEFORE HE KILLED GEORGE FLOYD.

I read numerous news articles today and yesterday from a variety of sources and one in particular, gave names and circumstances of the killings of multiple African American people by police in 2014 alone–  Another dynamic that stood out in these killings besides blatantly abhorrent racism was that at least three of the people killed by police had known mental health illnesses.  Police education about mental illness and other conditions is another change that needs to happen.  This also highlights the importance of police KNOWING the people in their community and the importance of creating more opportunities for police to get to know people in their communities through nonstressful community activities.

I have attached photos of what I wrote in 2014 when Michael Brown was killed by a police officer in that tragic injustice.  (Excerpts are taken from my book Conceiving a Peaceful World.)  I can’t copy, cut and paste the text in, so please forgive the use of photos for text.  At the end Dennis Kucinich wrote about changes he proposed to address the use of military equipment against citizens and the militarization of police in the U.S. 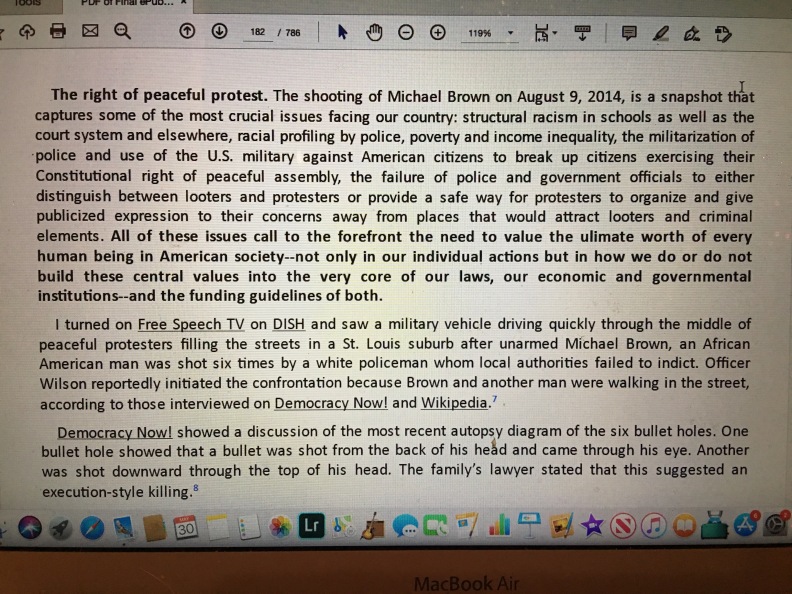 Reading about Michael Brown’s autopsy report was disturbing and horrific–and it was shocking that the officer was not indicted, given this type of evidence.  Conflicting reports about evidence and a climate of structural and imbedded racism in Ferguson further exacerbated the situation.  The use of military vehicles against protesting citizens was also shocking. 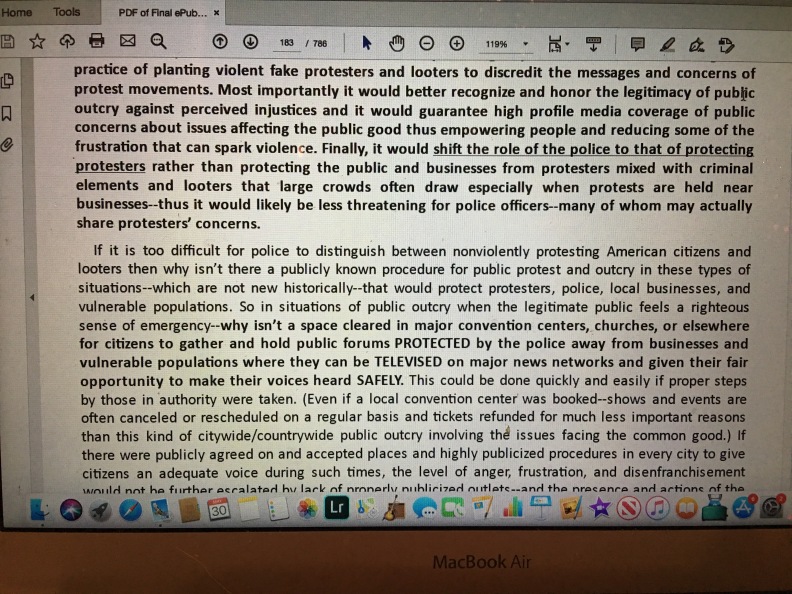 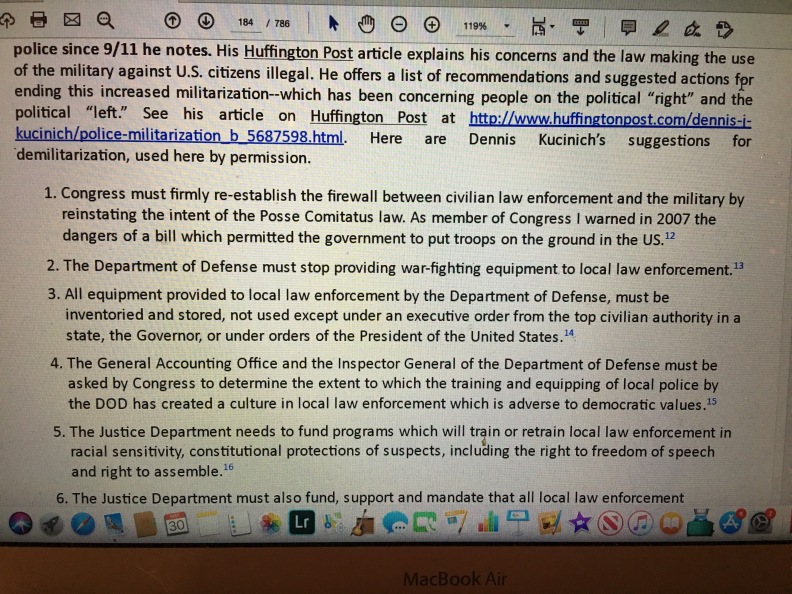